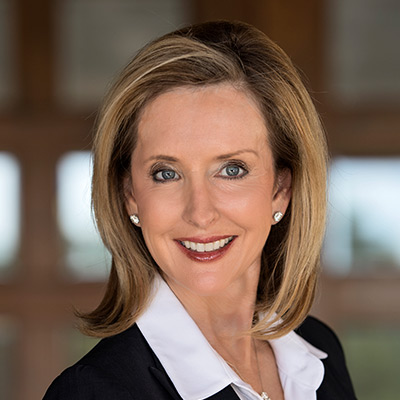 Karrin Taylor Robson is a respected and long-time Arizona business leader and land-use expert. She is Founder and President of Arizona Strategies, a premier land use strategy firm headquartered in Phoenix. Throughout her extensive career, she has entitled more than 20,000 acres including more than 35,000 homes and over 25 million square feet of commercial uses.

Karrin has worked with national organizations representing major landowners and stakeholders across the country to advance balanced federal environmental law and policy on endangered species acts and wetlands issues. In addition, she has advanced multiple public-private partnerships, leveraging private sector capital to deliver public infrastructure and other public benefits.

Karrin also serves on the boards of numerous government, community and economic development organizations. In June 2017, she was appointed by Governor Doug Ducey to the Arizona Board of Regents which is responsible for the governance of the state’s public universities, Arizona State University, Northern Arizona University and the University of Arizona. She currently serves as the chair of the Joe Foss Institute, a board officer of the Greater Phoenix Economic Council, and a board member of the Arizona Chamber of Commerce and invisionAZ. In addition, Karrin serves as a member of the Civic Leaders Group for the Chief of Staff of the United States Air Force.

Prior to forming Arizona Strategies, Karrin served as Executive Vice President of DMB Associates, Inc., a Scottsdale based master-planned community developer where she was responsible for ongoing land use entitlement matters and other value-enhancing efforts for its communities and businesses.

Earlier in her career, Karrin was a principal with the law firm of Biskind, Hunt & Taylor, P.L.C., where she practiced in the areas of land use, development and zoning law representing large landowners on significant and complex land use cases.

Her deep Arizona history and professional experience have shaped her perspective on our culture today and helped define her personal priorities. She believes that being actively involved in the community is a prerequisite for being an American.

Through her numerous professional, community and philanthropic commitments, Karrin advocates daily for building and sustaining a dynamic and diverse economy, protecting property rights and creating value in real estate, developing a world-class education system with options for all types of learners, fostering civic engagement and supporting the men and women who serve in our military.